Scatterplots and the Coefficient of Determination 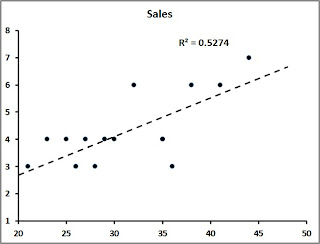 One of my favorite charts and accompanying functions are Scatterplot (XY) Chart and the Coefficient of Determination function.

A Scatterplot Chart is commonly used to show the relationship between two variables or sets of data. For example, a sales manager could plot the number of sales calls taken with the number of sales made. Another example is comparing the average length of time a customer service representative takes per call and the overall quality score of their calls.

To determine how strong the correlation is between the sets of data, the wily Excel user can make a Scatterplot Chart and:

The R-squared value is your Coefficient of Determination (COD) that will tell you how strong your data on your two axes. In the graph example above the COD value is .5574 (or approximately 56%) representing a strong correlation (and therefore reliable).

There you have it! Try using a Scatterplot and Coefficient of Determination sometime when seeking the correlation of data sets. It’s easy and can reveal some valuable information.

First of all, I want to congratulate the winner of our “People who use Excel are Cool” Contest that was announced two weeks ago. Gordon Guthrie of Linlithgow, Scotland was the winner with his creation of an Excel clone that works as a native web application. Gordon’s fine work can be viewed using Firefox, Safari or Chrome browsers by accessing the following link:

Well, it’s not exactly Easter, but I thought it might be fun to talk about the so-called Easter Eggs that have been hidden in Excel. Virtual Easter Eggs are hidden games or messages that are built into software by crafty developers who have a sense of humor and enjoy building in a bit of intrigue for the “Insiders” who wish to search for the cryptic content. The term was coined in the late 1970s at Atari by the renowned computer game designer, Warren Robinett. Since designers were not given credit for the games they created, Robinett included a hidden screen which said “Created by Warren Robinett”.

The Excel 97 version had a comparatively ambitious Flight Simulator hidden within the application. Using a rather simple combination of keyboard commands brought you to this remarkable simulator.

Although there are rumors to the contrary, there are no widely-known hidden gems in Excel 2007 or Excel 2010. The general consensus is that Easter Eggs have been eliminated from Excel due to potential security concerns. If you know of any eggs in these versions, please write to me at ExcelEnthusiast@gmail.com. I would love to share them with our merry group! Cheers!
Posted by Bob DeLaMartre at 9:23 AM No comments:

Working with Excel on iPad 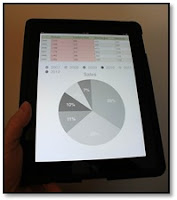 Since you are reading this blog on a Kindle, it is likely that you also own (or are thinking about owning) an iPad. Aside from all of the clamor from advocates and naysayers, the iPad can coexist nicely with a Kindle, and can provide an alternative for working on Excel rather than being tied to a full-blown desktop or laptop computer.

There is no doubt that not all Excel’s features are available when working on an iPad. For a great many common tasks, however, it is more than sufficient, and there is something very positive about being flopped on a sofa and still having access to your favorite software. Not only that, but as the software makers further refine and create new applications that can handle spreadsheets, the possibilities continue to grow.

There are a growing number of applications that the Excel Enthusiast / iPad Owner can use. My favorites are Quickoffice’s Quicksheet and Apple’s Numbers. Although DocsToGo is a worthy contender, most users (in my humble opinion) will find the features and user interface more pleasing with the other two apps. I have been using all three applications since shortly after the iPad’s debut and I find I seldom use DocsToGo for anything other than PowerPoint.

While either Quicksheet or Numbers can handle a great variety of formulas, creating Charts in Apple’s Numbers is a real treat. Both of these applications can import and export in Excel format. This is of keen importance, of course, as what good is a spreadsheet if you can’t export it back to Excel.

Although it may be a bit foreign at first, tapping to select cells and using the convenient selection handles to choose a range becomes second-nature quite quickly. The now commonly known pinching gestures zoom you in or out on your data and charts, and it is easy to get hooked on these new ways of getting around a spreadsheet.

Once you have created your spreadsheet masterpiece on your iPad tool, you can easily email it in its original Apple format, a PDF or, of course, as an Excel document.

Although some will deride this new way of interfacing with your data, I firmly believe that if you give it a chance, you will find that it makes a pleasant and productive alternative way of working with your Excel creations. Cheers!
Posted by Bob DeLaMartre at 8:50 AM 2 comments:

Posted by Bob DeLaMartre at 3:15 PM No comments: