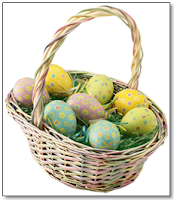 Well, it’s a bit past Easter, but it is time to revisit the topic of the so-called Easter Eggs that have been hidden in Excel. As was discussed in this blog back in 2010, Virtual Easter Eggs are hidden games or messages that have been built into various software by crafty developers who have a sense of humor and enjoy building in a bit of intrigue. In the case of Excel, those “In-the-know” felt smug knowing how to reach the cryptic content.

Where did the term “Easter Eggs” come from?
According to available history, the term was coined in the late 1970s at Atari by the renowned computer game designer, Warren Robinett. Since designers were not given credit for the games they created, Robinett included a hidden screen which said “Created by Warren Robinett”.

For those of us who remember using Excel 97, there was a particularly fine Easter Egg lurking within. This Excel version had a comparatively ambitious Flight Simulator hidden within the application. Using a rather simple combination of keyboard commands brought you to this remarkable (for the time) simulator.

Although more difficult to access, Excel 2000 included a Car Racing Action Easter Egg which resembled Spy Hunter (you can still find a version of this game online).

Although rumors to the contrary still persist, I know of no hidden gems in Excel 2007 or Excel 2010. The general consensus is that Easter Eggs have been eliminated from Excel due to potential security concerns and the desire by management to use all of the resources for “worthwhile” functions. If, however, you know of any eggs in these versions, please write to me at ExcelEnthusiast@gmail.com. I will send a One-Ounce Copper Lakota Bullion Coin to the first two verifiable replies.

Although it is not an Easter Egg, Excel possesses an Undocumented "DATEDIF" function, which calculates the difference in whole days, months or years between two dates. It can be quite useful, and it is curious that Microsoft doesn’t include it in its general information.  Even though it has been around since Version 5 and is still present in Excel 2007 and 2010, it was only documented in Excel 2000.

Building on the theme of Conditional Formatting that was discussed last week, there are several instances where having Repetitive Data (identical data entered more than once) into a database is Undesirable. For instance, if you were an HR Manager, you may wish to have the names of employees entered Only Once in a company database.

It is useful, therefore, to have a Tool to Identify any such repetitive entries. Using Conditional Formatting with a Clever Formula is one way to accomplish this. Noticing that we are using the above Excel graphic as an example, the following COUNTIF formula, (please note the less-than and greater-than characters that together mean Not Equal To in Excel), can do the trick:

Since you are using this formula in a Conditional Formatting statement, you want to have a result of TRUE whenever you want the infringing cell to be highlighted. When the formula returns a TRUE, it activates your chosen formatting. 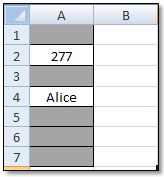 Here is a Very Interesting Trick that you probably have never run across. I think we can all agree that it is almost always helpful to have Visual Cues in Excel, and this one takes an Unusual Approach.

Let’s say you have a worksheet in which you are entering data in a column, and you want it to be Obvious if a cell within that column is Blank (a Best Practice for proper database maintenance). Here is a unique way to do this:

Let’s assume you are going to be putting data in the short range of A1:A10.

2. Then select your range and go to Conditional Formatting / New Formatting Rule

3. Choose Use a formula to determine which cells to format and put the following:

5. Finally, for your Format, use Fill / No Color

Now whenever you place data (numbers, text, or mixed) in one of your cells in the range, the Fill Color is Cleared! How Cool is That!

Whenever you have a cell that has NOT had data entered into it, the original Fill Color remains. Give it a try; I think you will find this to be another Great Trick in Your Excel Tool Belt!
Posted by Bob DeLaMartre at 11:47 AM No comments:

The Beat Goes On… 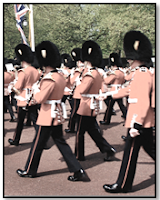 Since you are reading this blog, it may be likely that you have influence within your company as regards the software they adopt.  When it comes to Excel, a recent survey showed that many companies still use Excel 2003, some use Excel 2007, and a comparative few have adopted Excel 2010.


Once again, since you are a reader of this blog, you are probably and Early Adapter, and would like to see your company update to the latest version of Excel.  To that end, I have condensed the most compelling reasons to update:


Like so many other things in our increasingly technological world, if you don’t keep up on a regular basis, you can one day find yourself being passed by at the parade of progress.
Posted by Bob DeLaMartre at 11:31 AM No comments: