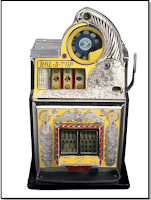 It should be noted that some hard core statisticians have voiced concerns about the true Randomness of the RAND function (it is prone to sequential correlations if large runs of numbers are taken), but it suffices for nearly all but the most demanding statistical applications, and if fine for us mere mortals.

The Syntax for the Rand function is simply:

There are countless statistical applications, of course, but you can also use it in some entertaining applications. For example, some Excel Enthusiasts have used it to create Tetris-style and Dice-Rolling games in Excel.

I have used the RAND function in conjunction with other functions and graphics to create a Slot Machine in Excel (send me a request at excelenthusiast@gmail.com if you would like a copy of the Slot Machine spreadsheet). I will be happy to send a copy to you.

The RAND function. Great for use in statistical applications, building games, slot machines, and other Fun Stuff!

Cheers!
Posted by Bob DeLaMartre at 9:21 AM