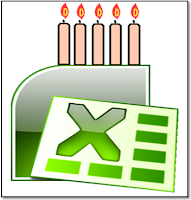 Looking back on 2010, it is interesting to note that our baby, Excel turned 25 in September. Introduced as a new spreadsheet program in late 1985, and (interestingly) designed for the Apple Macintosh, the new product gave Apple a badly needed business application.

Even if you were an adult back in 1985, it can be hard to recall some of the big events, and how different things were back then. Back to the Future was the highest grossing film of the year. It was announced that Christie McAuliffe would become the first school teacher to ride aboard the ill-fated Challenger. 10,000 people were killed in an 8.1 earthquake in Mexico City. It was in 1985 that the CD-ROM was developed. 1 Mb of RAM (Imagine!) was the standard in PCs. Windows 1.0 was released, we were singing, “We are the World”, and 25 year-old Doug Klunder became the proud Father of Excel.

Nowadays, our daily lives are intertwined with Google, Facebook, and Twitter. In 1985, however, few people had a personal computer and, of course, the Internet was in its infancy. It was in these very different times that a Great Energy was released.

A case can certainly be made (and undoubtedly debated) that of all technological developments, Excel has had the biggest impact on the corporate environment and society in general. It has been used for such common applications as planning the household budget, and such near-devastating purposes of planning out ultra-complex securities that nearly took down our national economy.

Excel has indeed put great power in the hands of those who learn it and apply it with a strong sense of purpose. So, Happy Birthday, Excel! It is a New Year and we will most certainly find new ways to use your muscle.
Posted by Bob DeLaMartre at 8:24 AM