REPT is one of those functions in Excel that most users find obscure and of little use. I have to admit that I was one of those users until I started investigating this strange little function with a keener eye to what it can accomplish.

As illustrated in the following, REPT simply returns a specified text string a stated number of times: =REPT(“Text”, Number of times)

So, what is an example of one of the many ways that REPT can help us solve a curious little problem in Excel.

For instance, let’s assume you want to convert some raw numbers to System Codes for your company? Let’s also assume that the System Codes have 8 characters and start with a zero if less than 8 characters. In the illustrated table below, you can start with the following function in B2, and drag it down to B8: =CONCATENATE(REPT(0,8-LEN(A2)),A2) 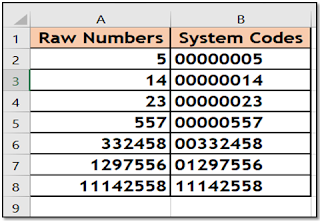 Nice! Just one simple way to use the often-overlooked and slightly mysterious REPT function!
Posted by Bob DeLaMartre at 12:01 PM