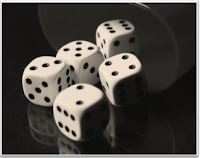 The syntax for the Rand function is simply:

So how can you use this nifty little function? It can be used in myriad ways; for example, it can be used in conjunction with other functions to create a Password Generator. There are countless statistical applications, but you can also use it for entertaining applications. For example, one Excel Enthusiast used it create a Tetris-style game in Excel.
I have used the RAND function in conjunction with other functions and graphics to create a Slot Machine in Excel (send me a request at excelenthusiast@gmail.com if you would like a copy of the Slot Machine spreadsheet).

The RAND function. Great for use in statistical applications, as well as some RANDom FUN!
Posted by Bob DeLaMartre at 7:38 AM

Or you could use the function to run lucky draws